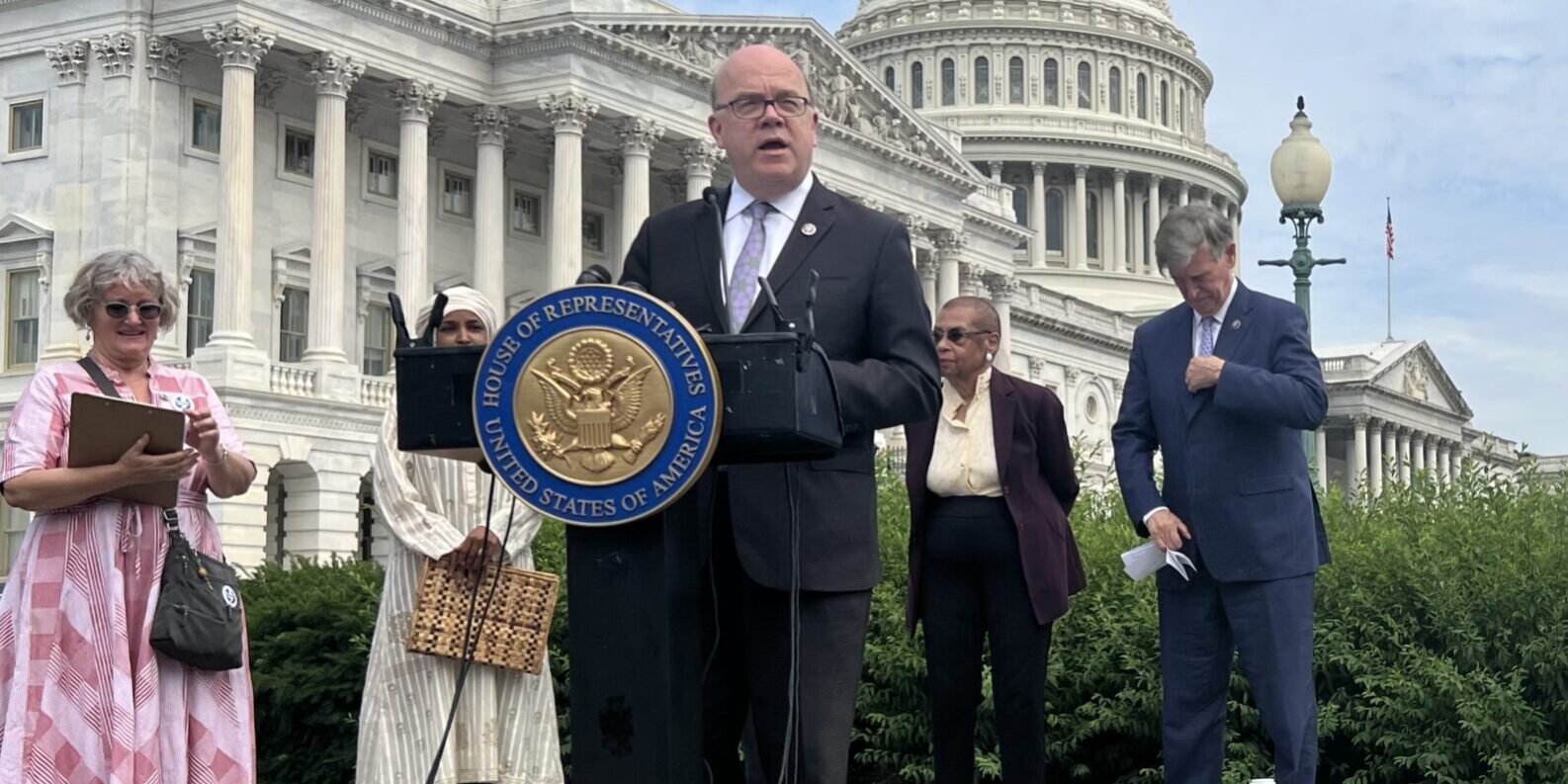 Washington, D.C.- On June 22, five members of Congress gathered at a press conference in front of the Capitol. Each called on the United States government to sign and ratify the Treaty on the Prohibition of Nuclear Weapons (TPNW).

The press conference was livestreamed to Vienna, Austria, where the first Meeting of States Parties to the TPNW was being held at the same time. Congressman Earl Blumenauer insisted that the United States should have been officially represented at the meeting, saying “we should be there in Vienna being part of this conversation.” House Rules Committee Chairman Jim McGovern noted, “regrettably, the United States is not party to this treaty. Regrettably, none of the major nuclear powers is party to the treaty.”

Referencing the war in Ukraine, Congresswoman Ilhan Omar pointed out that “the threat of nuclear war has become more real this year than it has for previous decades…These weapons cause widespread humanitarian and environmental damage, impacting everyone, regardless of the target…The complete elimination of nuclear weapons is the only solution for a safer and more peaceful world.”

Blumenauer said “this is an unfathomable set of circumstances which could spiral out of control very quickly.” Congressman Don Beyer noted that “a conventional war in Ukraine could turn into a nuclear war, whether it’s intentionally or [by] miscalculation, or even by accident, and that’s why the United States should set an example and join the Treaty on the Prohibition of Nuclear Weapons.”

Blumenauer reminded the audience of the squandered taxpayer dollars the U.S. nuclear arsenal demands, stating, “these are weapons that we can’t afford, and we can’t afford to use.” Said McGovern, “I believe we need to redefine what national security means. It’s not just the number of bombs we have…it’s whether or not people have adequate housing. It’s our environment, it’s whether people can put food on the table…we’re told there’s no money, but yet when it comes to nuclear weapons and the military budget, Democrats and Republicans trip over each other as to who can advocate for a higher amount.”

Blumenauer noted that “we’ve been trying to get estimates of what the next rounds of [nuclear] modernization are going to cost, and we haven’t even been able to get an estimate at a time when we are desperate to be able to deal with the consequences of the pandemic, rebuilding and renewing in this country, dealing with the damage to our young people and our healthcare system. This is lunacy.”

Beyer added, “How many times do we need to kill every living thing on this planet?”

McGovern noted that “there are those who point to the invasion of Ukraine as a reason to call for a new nuclear arms race. I believe we must race in a different direction.”

Congresswoman Eleanor Holmes Norton, whose bill, H.R.2850, calls explicitly for the US to sign and ratify the Nuclear Ban Treaty, explained, “My bill would help the United States reestablish its moral leadership in the world by redirecting funds that would otherwise go to nuclear weapons…to ​​human and infrastructure needs such as housing, healthcare, social security, restoring the environment, and creating carbon free, nuclear free energy.”

Vicki Elson of NuclearBan.US, which lobbies Congress to support H.R. 2850 and sign a legislative pledge to support the TPNW, said that efforts to abolish and eliminate nuclear weapons are not “pie in the sky idealism. This is the survival of our country, of our families, of our species.” She said that the pro-TPNW Members of Congress “are not fooled by the theory that having thousands of climate-wrecking, civilian-slaughtering, accident-prone, hair-trigger weapons of mass extinction is somehow keeping us safe.”

She urged listeners to “please use your constituent superpower to urge your own representatives to join the rest of the world in bringing the nuclear nightmare to an end.”

Omar, a survivor of the Somali Civil War, explained why she “won’t stop fighting.” She said, “I know a better world without nuclear weapons and never-ending war is possible.”