The International Campaign to Abolish Nuclear Weapons (ICAN) invites elected officials across the world to demonstrate their support for the Nuclear Ban Treaty, including members of provincial and state legislatures, by signing the following “pledge:” 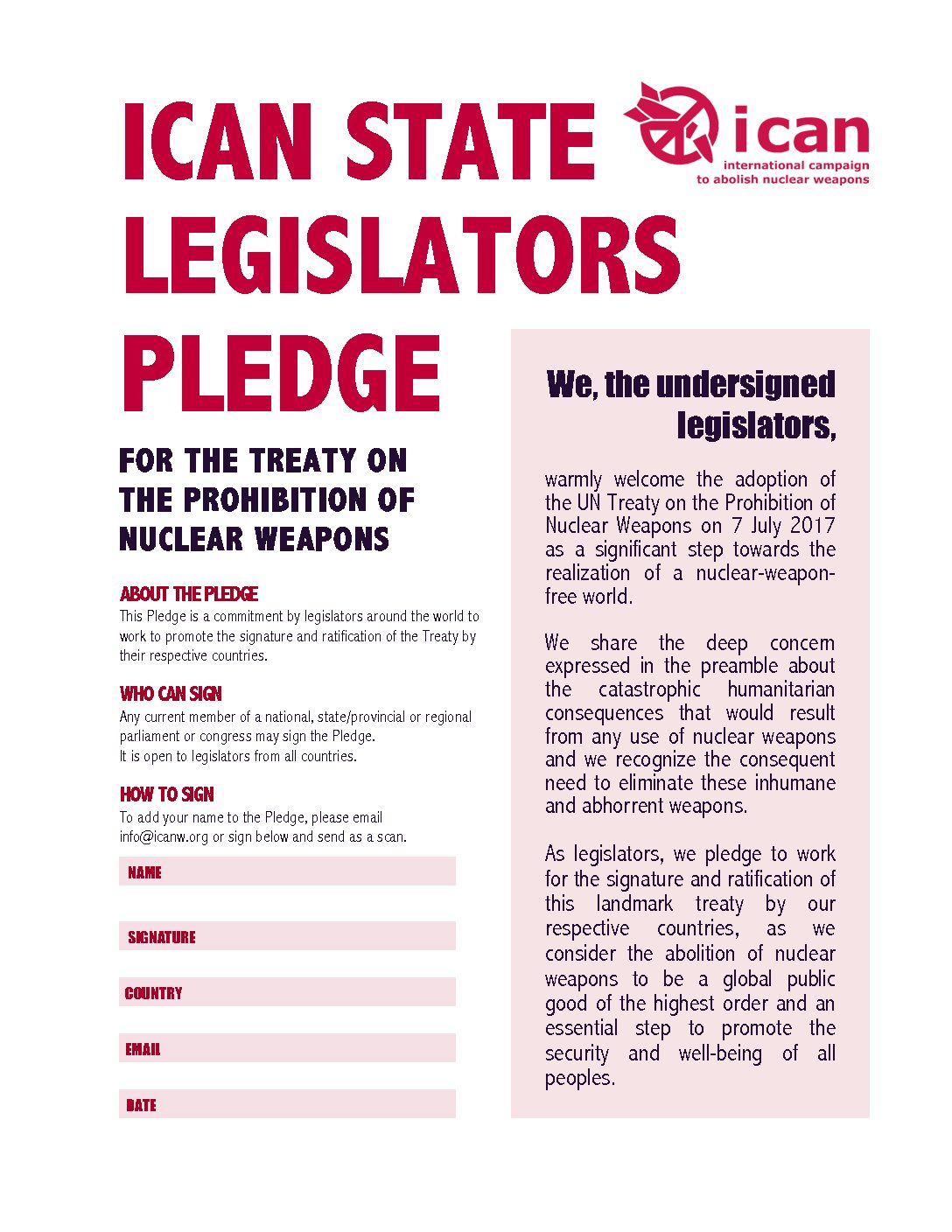 More than 1,600 elected officials in 32 countries have signed this pledge, calling for their governments to sign and ratify the Nuclear Ban Treaty, including 11 current members of the US Congress so far.

To build support in Congress, more state legislators need to sign this pledge and urge members of Congress to do likewise.

So far, 22 state legislators from Massachusetts, Minnesota, New York, and Oregon have signed the state pledge. Please see below for more details. We can do much better than this!

You can now add a subject line and send it!

PASTE INTO YOUR EMAIL APP &SEND TOGETHER WITH A COPY OF THE PLEDGE ATTACHED, AVAILABLE HERE.

AND DON’T FORGET TO INCLUDE YOUR HOME ADDRESS! MOST LEGISLATORS WILL NOT READ YOUR EMAIL UNLESS THAT IS INCLUDED.

(from the back of the printed Pledge form)

• The ICAN Parliamentary/Legislative Pledge is a commitment to work for the total elimination of nuclear weapons by all countries, through the universal adoption of the 2017 UN Treaty on the Prohibition of Nuclear Weapons.

• The United States made a legally binding commitment to eliminate its nuclear weapons more than 50 years ago, when it signed and ratified the Non-Proliferation Treaty (NPT), along with Britain, France, Russia, and China.

• In 2000, the United States, together with those same countries, gave to the rest of the world an “unequivocal undertaking” that they would fulfill this commitment to accomplish the total elimination of their nuclear arsenals.

• Fifty nations have now ratified the Treaty on the Prohibition of Nuclear Weapons, 34 nations are currently in the process of ratifying, and another 51 nations have so far committed to signing and ratifying it. It enters into force on January 22, 2021.

• This treaty makes it illegal under international law to develop, test, produce, possess, stockpile, transfer, use, or threaten to use nuclear weapons. It also makes it illegal to assist, encourage or induce, in any way, anyone to engage in any activity prohibited by this Treaty.

• More and more countries will continue to sign and ratify this Treaty, including key allies of the United States. Even if the US does not sign the Treaty, it will become increasingly difficult to develop, manufacture, deploy or justify its continued dependence on nuclear weapons.

• Some countries will be interpreting the ‘no assistance’ clause to mean that American companies engaged in the manufacture and development of nuclear weapons will be prohibited from doing business in those countries. Congress should be protecting American jobs by promoting conversion to more globally acceptable activities.

• More than 1,000 parliamentarians in countries not yet on board with the Treaty have signed the ICAN Parliamentary Pledge, including 140 in the UK, 130 in Germany, over 200 in Australia, and nearly 250 in Italy. So far 9 in the US Congress have signed it.

ICAN is now inviting state and provincial legislators to also sign this pledge, as a means of helping build pressure on the federal government to support the Treaty.

Who has signed the ICAN State Pledge so far?