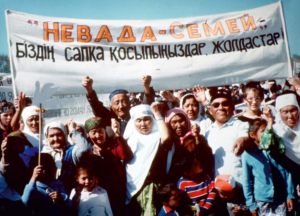 Kazakhstan became the 57th country to sign the Treaty on the Prohibition of Nuclear Weapons on Friday, 2nd March.

In a statement to the UN Security Council, President Nazarbayev of Kazakhstan called on the nuclear powers to ‘lead by example’ and get rid of their nuclear weapons. “Nuclear bombs and rockets do not possess real power. The true protection is provided through the trust of the international community,” the President said.

Kazakhstan is a the ninth largest country in the world in terms of land mass, taking up over 1 million square miles of Central Asia. It has a total population of around 18 million people, as many as 1 million of whom have been poisoned by the radiation from Soviet nuclear tests. The Kazakh steppe was chosen by the Soviet Union as the  location for over 450 nuclear tests between 1949 and 1989. Even after the Partial Test Ban Treaty of 1963 forced these tests to be moved underground, radiation continued to leak into the atmosphere, into drinking water and into the food chain as a result of the massive nuclear explosions taking place just below the earth’s surface.

Hundreds of thousands of people living in villages and towns downwind of the test site contracted cancers and other diseases over this period, and in one village as many as one in every 20 babies is born with serious birth defects. Amid growing evidence that the nuclear tests were causing widespread cancers and birth defects, one of the strongest anti-nuclear movements inside the Soviet Union emerged in Kazakhstan during the 1980s.

The Kazakh anti-nuclear movement brought thousands of people onto the streets and to demonstrations at the nuclear testing site. In 1989, 130,000 Kazakh miners vowed to go on indefinite strike if any more tests were carried out. Just as the Berlin Wall was coming down in Germany, the Soviet Union was being forced to stop nuclear weapons tests in Kazakhstan as a result of popular pressure. This people’s movement led to the President of the newly independent state of Kazakhstan to declare it a nuclear weapon free country in 1990 and to lead the way in creating the Central Asian Nuclear Free Zone, consisting of Kazakhstan, Kyrgyzstan, Uzbekistan, Turkmenistan and Tajikistan.

Kazakhstan has signed the Nuclear Ban Treaty because its people know only too well what radiation does to human beings.

“Our country’s denuclearization was not an accidental decision, but a well-considered and thoughtful act by a responsible state that has learned the horrors of nuclear tests which have resulted in sufferings with the worst possible consequences, even in the third generation,” the Kazakhstan ambassador said on signing the Treaty.

His hope is that many more countries will follow suit, by signing and ratifying the Treaty as soon as possible – and shaming the nuclear nations into eliminating their nuclear arsenals before these weapons are ever used again on human beings.