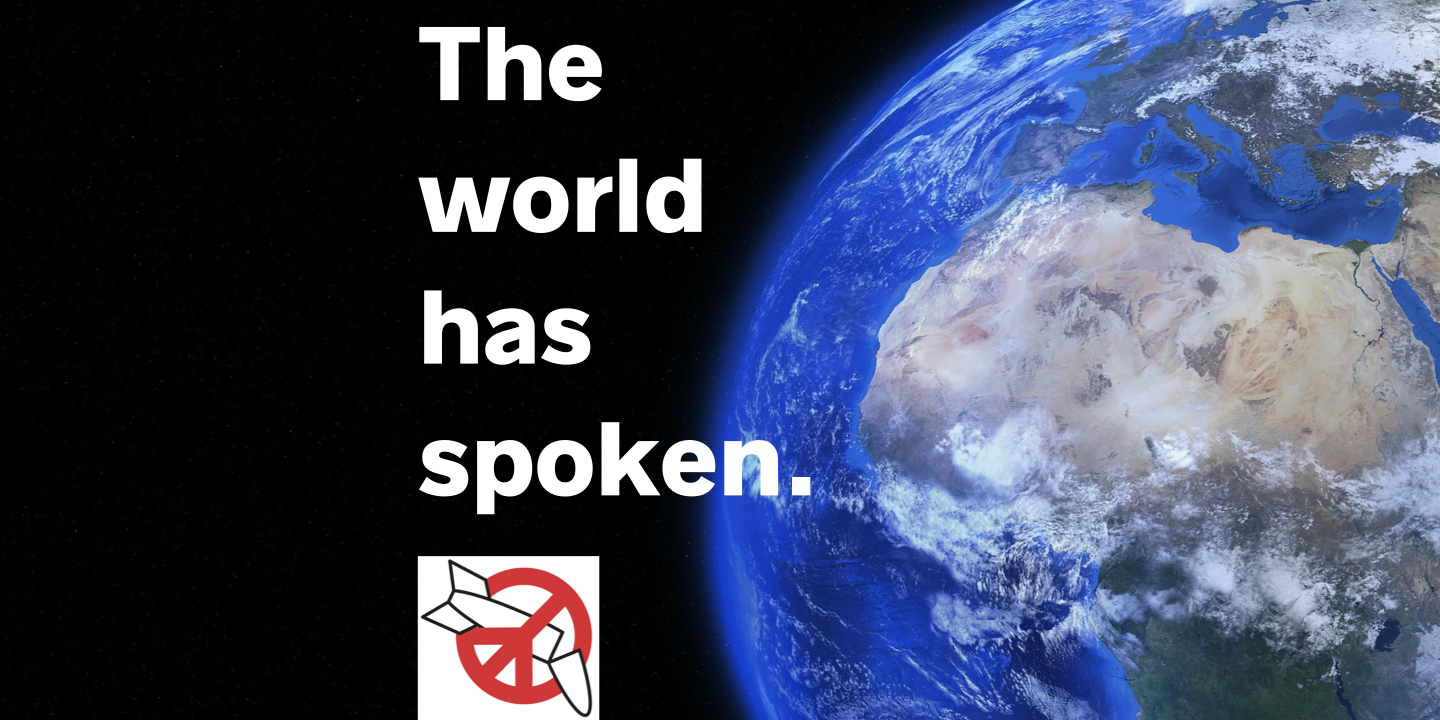 October 24, 2020: Honduras today became the 50th country to ratify the historic United Nations Treaty on the Prohibition of Nuclear Weapons (TPNW). It was an appropriate way to mark the 75th anniversary of the United Nations, whose first goal at its founding on this day in 1945 was to address the nuclear threat to the world.

On January 22, 2021, 90 days after the 50th ratification, the treaty will enter into force as international law. More countries are expected to ratify in the coming months. While ratification is the last step, 122 countries have already adopted the treaty, and 84 have signed it.

The nine nuclear-armed nations (U.S., Russia, China, U.K., France, Israel, India, Pakistan, North Korea) have so far boycotted the TPNW. But 26 companies build and maintain nuclear weapons, and many of those have operations, contracts, suppliers and investors in countries that have already joined the TPNW. They could soon be breaking the law in those countries.

The International Campaign to Abolish Nuclear Weapons (ICAN), which includes 590 organizations in 103 countries, facilitated the treaty at the United Nations. ICAN then won the 2017 Nobel Peace Prize “for its work to draw attention to the catastrophic humanitarian consequences of any use of nuclear weapons and for its ground-breaking efforts to achieve a treaty-based prohibition of such weapons.”

The treaty forbids everything to do with nuclear weapons, including developing, testing, producing, manufacturing, otherwise acquiring, possessing, stockpiling, transferring, using or threatening to use nuclear weapons. Already, the treaty has led to significant divestment by institutions around the world that decline to finance nuclear weapons, for moral or fiduciary reasons. There will soon be strong legal reasons for doing so as well.

Unlike previous nuclear treaties, created (and many subsequently abrogated) by the nuclear-armed nations, this one comes from the rest of the world, since all countries are at risk from nuclear weapons use, production, and testing.

On October 21, 2020, as the 50th ratification neared, the Associated Press reported that several ratifying countries had received letters from the Trump administration, asking them to withdraw from the treaty they had just joined. Such interference in a United Nations disarmament treaty is unprecedented.

The NPT entered into force in 1970, when there were only five nuclear-armed nations. Article 6 of the NPT commits the nuclear armed states to negotiate the elimination of their nuclear arsenals “in good faith” and “at an early date.” Fifty years later, there are nine nuclear armed states.

In Northampton, Massachusetts, Dr. Timmon Wallis found news of the Trump administration’s letter unsurprising. Wallis was involved in the treaty negotiations, and co-founded ICAN partner NuclearBan.US to promote the treaty in the United States.

He said, “The U.S. government has been trying to stop this treaty from the very beginning. Of course, this just proves how powerful and important this treaty actually is in terms of undermining the trillion-dollar US nuclear weapons industry. These companies are suddenly going to find themselves on the wrong side of the law in more and more countries around the world. It’s only a matter of time before they decide to get out of this business. The US government will then have no choice but to join the rest of the world in eliminating these weapons once and for all.”

NuclearBan.US co-founder Vicki Elson added, “Well, it’s nice that the nuclear nations all have something in common. They all love their weapons of mass extinction. But the world has spoken, the time has come, and nuclear weapons are going to be eliminated. Hopefully before they eliminate civilization, or life on earth.”

As the news of Honduras’ ratification broke, ICAN members worldwide held a spontaneous Zoom celebration. They speculated about which nuclear-armed nation would be the first to “be on the right side of history” and join the TPNW. They also acknowledged the campaigners who have been working toward nuclear abolition since nuclear bombs were first used in 1945.

One of those is Setsuko Thurlow, 88, who survived the U.S. nuclear bombing of Hiroshima when she was 13. Thurlow said she “cried tears of joy” as the TPNW reached this milestone. She acknowledged that she will probably not live long enough to see the last nuclear weapon dismantled, but she reiterated her vow to continue campaigning “to my dying breath.”

And as covered by the New York Times: