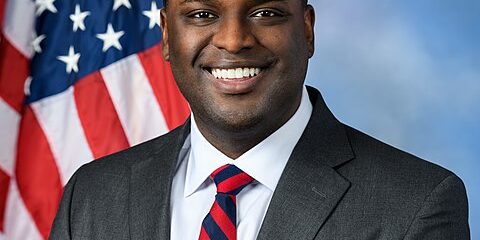 Washington, DC: On Friday, June 3, U.S. Rep. Mondaire Jones (D-NY-17) co-sponsored the Norton Bill, making him the seventeenth Congressional leader in support of the Treaty on the Prohibition of Nuclear Weapons. This bill would abolish everything to do with nuclear weapons and use the saved money to fight the climate crisis and other vital social issues.

Rep. Jones serves as the Freshman Representative to Leadership in the 117th Congress, making him the youngest member of the Democratic House leadership team. He also serves as a Deputy Whip for the Congressional Progressive Caucus and as a Co-Chair of the LGBTQ Equality Caucus. Additionally, he has been on the NAACP National Board of Directors and is a co-founder of the nonprofit Rising Leaders, Inc., which teaches professional skills to underserved middle-school students. Rep. Jones has also served on the board of the New York Civil Liberties Union. He fights for reform of the criminal justice system, living wages and civil rights and liberties for all, universal healthcare, and climate action.

Rep. Jones is part of the growing contingent of young, progressive Democrats in Congress, many of whom have already co-sponsored the Norton bill. The bill, H.R.2850, is gaining momentum, acquiring more co-sponsors in each Congress which it is introduced. With the war raging in Ukraine, the globally respected Bulletin of the Atomic Scientists has updated the Doomsday Clock to indicate 100 seconds to midnight – what they call “doom’s doorstep”. Having enough nuclear weapons to obliterate the entire planet is counteractive to a safer world; Jones and many other members of Congress are committed to eliminating the nuclear threat.

See the following links for more information about the growing support for the Norton Bill.