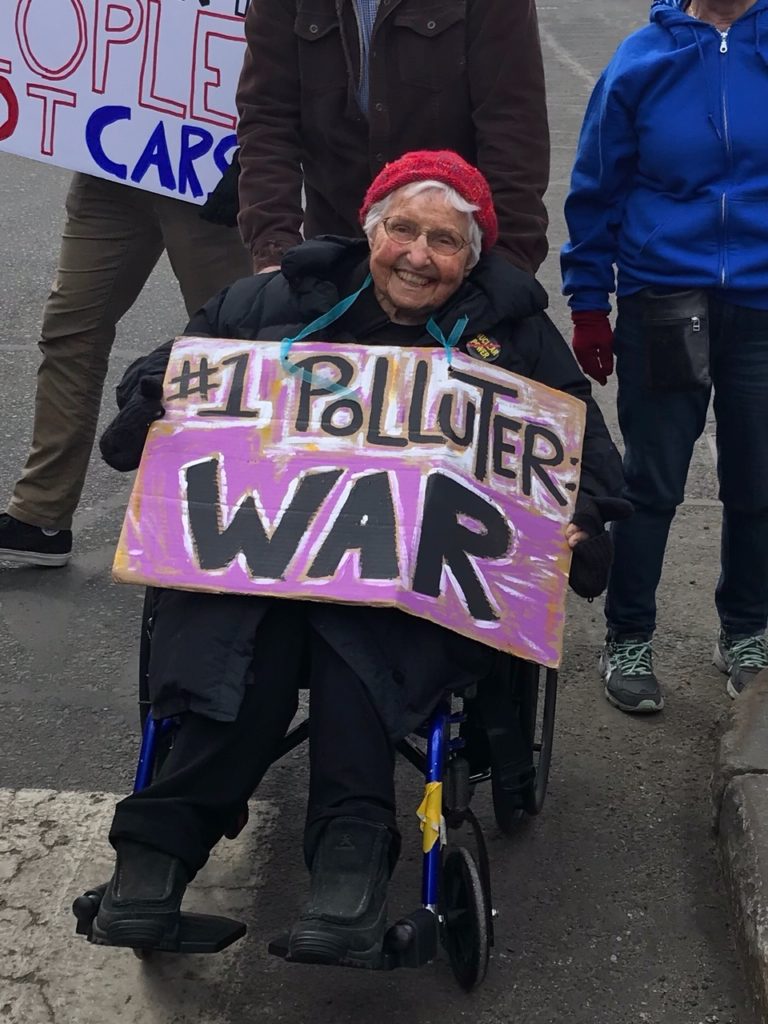 Frances Crowe celebrates her 100th birthday with a protest in Northampton. Photo courtesy of Sue Tippett.

Hundreds of people marched down the main street of Northampton, Mass., on Saturday, March 16, to mark the 100th birthday of legendary peace and anti-nuclear activist, Frances Crowe. She asked people to make homemade signs and banners about all the different issues they care about, and these are now on display as a temporary art exhibit in her honor at the Northampton Center for the Arts.

Frances herself has been involved in just about every peace and social justice issue there is, including opposition to the Vietnam War (and all the wars since then), apartheid in South Africa, campaigns for women’s rights and racial justice, opposition to nuclear power and to recent gas pipeline construction. The abolition of nuclear weapons has always been an issue close to her heart. NuclearBan.US formed in her living room in November of 2017 and is honored to have her as an advisor.

“No one else believed it. So you couldn’t talk to anyone else about it. And it wasn’t until John Hershey’s article in the New Yorker a year later where he really talked about what had happened at Hiroshima that people began recognizing what it was, and the dangers of these weapons.”

When Frances and her family moved to Northampton, Massachusetts in the 1950s, they got involved in starting local chapters of Physicians for Social Responsibility, the Committee for a SANE Nuclear Policy, and the Women’s International League for Peace and Freedom. They also became very active in the local Quaker community.

During the Vietnam War, Frances trained thousands of young men as Conscientious Objectors to avoid the draft, sometimes even picking up hitchhikers to reach a captive audience. Out of this work developed the American Friends Service Committee of Western Massachusetts, which she ran on a shoestring budget out of the basement of her house for decades. Beginning in the 1960s Frances engaged in direct action against the U.S. nuclear weapons system. One time, she canoed out to a nuclear submarine stationed in Groton, Connecticut, and poured blood in protest. 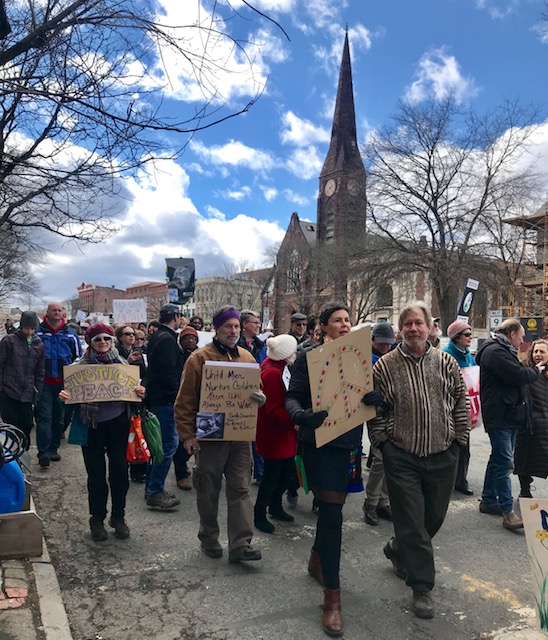 In 1980, after reading a report from anti-nuclear activist Randall Forsberg entitled “Call to Halt the Nuclear Arms Race,” Frances and another local activist, Randy Kehler, applied for a small grant with the AFSC to support the Call in the U.S. With the help of other peace activists, Frances and Randy helped get the Call passed in 59 towns across Western Massachusetts. The Call quickly spread across the country, sparking what became known as the Nuclear Freeze movement.

Since that time, Frances has continued to be an outspoken advocate for the abolition of nuclear weapons and nuclear power. She helped launch the Nuclear and Carbon Free Future coalition in Western Massachusetts. In early 2018, this coalition took on the local work of NuclearBan.US, working to get local towns, businesses and faith communities to align themselves with the Treaty on the Prohibition of Nuclear Weapons with divestment from and boycotts of the nuclear weapons industry.

When reflecting on her life so far, Frances muses “It’s a good life. You have a purpose in your living, and it’s the most interesting group of people.” The activism she witnesses among today’s young people continues to give her hope for a more just and peaceful future. During the birthday march, Frances called out, “Put the young people out in front!”  Thank you Frances, and Happy Birthday!