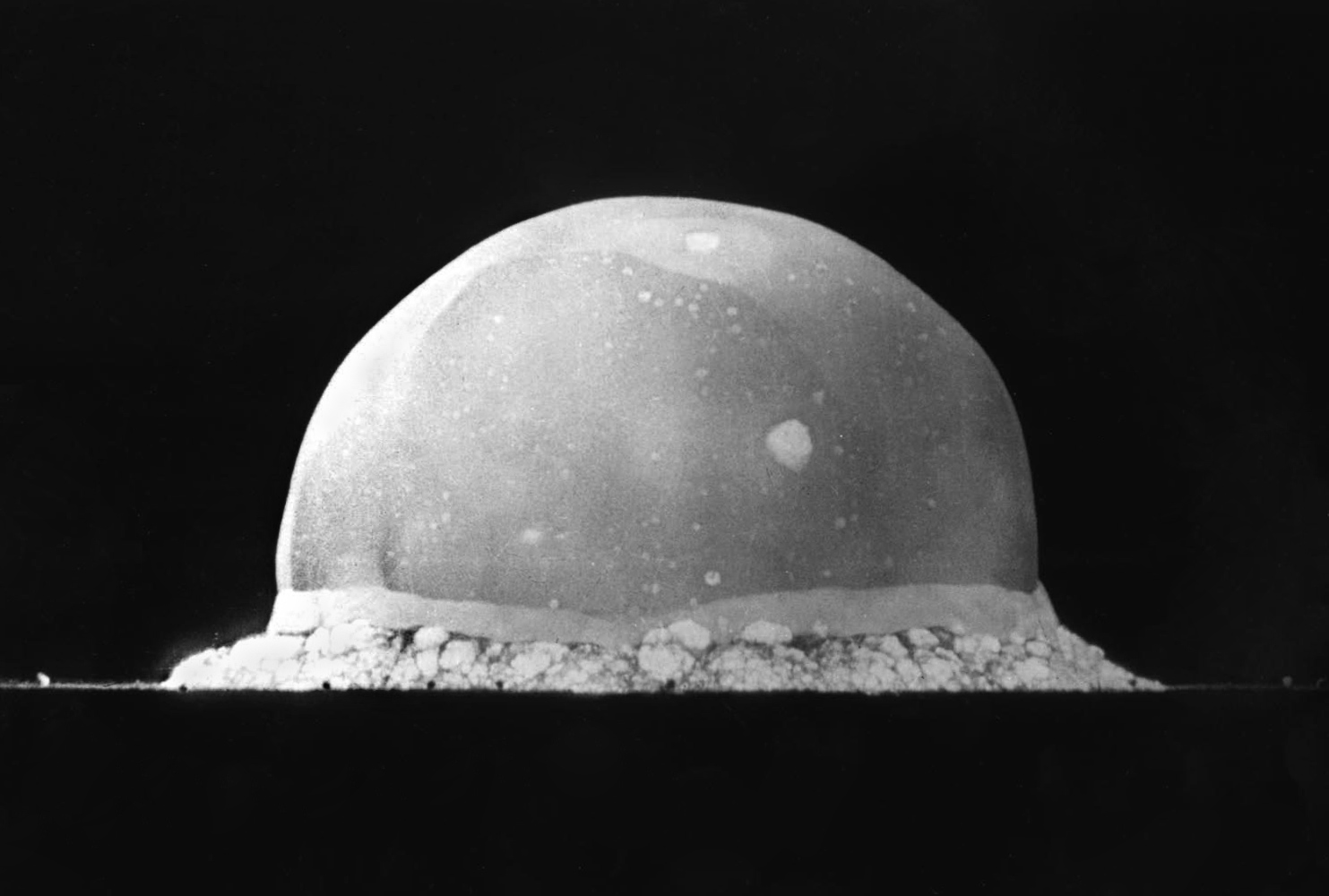 Last week marked the seventy-third anniversary of the day the United States unleashed nuclear hell upon the world. On July 16th, 1945, at 5:25 AM on the Alamogordo Bombing and Gunnery Range in South Central New Mexico, a group of 500 scientists and military personnel covertly detonated the first atomic bomb, springing us full force into the nuclear age. A mere two-and-a-half weeks later these bombs would be unleashed on the Japanese cities of Hiroshima and Nagasaki, killing hundreds of thousands of civilians. Since that day, the US has conducted over 1000 nuclear weapons tests, predominantly in Nevada and the South Pacific, exposing millions of people to high levels of radiation. People living in the vicinity of tests and exposed to radioactive fallout are colloquially called “downwinders.” They are part of the under-acknowledged “collateral damage” of our nuclear weapons industry.

The first nuclear weapon test known as the Trinity test was marked by uncertainty and excitement. The Manhattan Project Scientists debated everything from whether the bomb would even detonate to the potential that the blast could destroy much of the Southwestern US and even ignite the entire atmosphere of the planet in a fireball. While the immediate area around the detonation site was unpopulated, there were thousands of rural New Mexican residents lived within a 50-mile vicinity of the blast, and they were not informed about the test. The official cover story given to nearby residents who witnessed the blast was “an accidental detonation of a bunker containing a number of high explosives and pyrotechnics.” It was not until after the bombing of Hiroshima and Nagasaki that the Trinity test was revealed for what it was. Most of the people living in adjacent communities who witnessed the test have said they thought the world was coming to an end.

The thousands living downwind from the Trinity blast were knowingly exposed to extremely high levels of radioactive fallout. Many New Mexicans living in the vicinity of the Trinity test were ranchers, Native Americans, Hispanic settlers and people who lived a rural and subsistence lifestyle. Unbeknownst to them their land, their water and their food were severely contaminated by radioactive fallout. The effects of this exposure are still evident 73 years later in the physical, economic, and mental hardships of survivors and their families. Downwinders developed certain types of cancers at rates that far exceed the general population. In many cases, entire families developed cancer. Many downwinders were also forced into debt and poverty from costly health treatments – none of which were compensated by the federal government.

The extent of the suffering caused by the Trinity test is widespread and ongoing – not quantifiable or reducible to a monetary value. Tina Cordova is the co-founder of the Tularosa Basin Downwinders Consortium which formed in 2005 to collect data on the impact the Trinity test has had on the downwinder communities. Tina is a Tularosa resident and cancer survivor and four of her family members have also contracted cancer. She explains, “There has to be an acknowledgement that in the Federal government’s rush to make nuclear weapons, they sacrificed the lives and health of thousands of New Mexicans. We were the first casualties of nuclear weapons and this is not going to end anytime soon. The first trauma is the widespread loss permeating families and communities, and the second is knowing that after seventy three years your own government still refuses to even acknowledge, apologize, and compensate those affected.”

In 1990 the federal government passed the Radiation Exposure and Compensation Act which established the Radiation Exposure and Compensation Program to provide apologies and compensation to individuals who developed certain types of cancer as a result of nuclear weapons testing. Under RECA, those deemed eligible were entitled to an apology from the federal government, monetary compensation and comprehensive health care coverage. Since RECA was introduced, $2.25 billion has been paid out to downwinders, atomic veterans, and former uranium miners and mill workers. In order to qualify for compensation, however, individuals must have lived within a pre-designated proximity to a nuclear test site. These pre-designated areas do not coincide with the actual spread of radiation, and have left many communities exposed to some of the highest levels of radiation ineligible for compensation. Trinity downwinders are one of the groups not included within the pre-designated eligibility area of RECA, which has limited eligibility to only select counties in Nevada, Utah, and Arizona. The federal government has never formally acknowledged the impact the Trinity test has had on New Mexican communities and recent attempts to study the health impacts of the Trinity test have been shrouded in secrecy and limited in scope.

The Trinity downwinders have been fighting for recognition and compensation for the damage the Trinity test had on the physical, mental, and economic health of downwinders since 1945 (you can read the powerful testimony of Trinity downwinders here and here). Most recently, they have joined with other downwinders in the US and Pacific Islands and the Navajo Nation in an effort to pass Senate Bill 197 – the Radiation Exposure Compensation Act Amendment. which would expand the criteria of those eligible for compensation under the program. Under Senate Bill 197 eligibility for compensation would be amended to include the downwinders of New Mexico, Colorado, Idaho, Montana, and the Pacific Islands, and to qualify post-1971 uranium mine and mill workers who remain ineligible for compensation under the current act. The amendment was introduced to the Senate on January 24, 2017, and a hearing was held on the amendment June 27th of this year. According to Tina Cordova, what the Trinity Downwinders covet the most from RECA is the health care cards that would entitle them to some of the best health care available and go a long way towards helping alleviate the cycles of debt and poverty rampant in their community. Congress has stalled on moving forward with the bill, despite the sustained pressure from affected downwinders, miners, and the Navajo Nation.

People can help support these unacknowledged victims and survivors of nuclear weapons tests by writing and calling their Senators and urging them to vote in favor of Senate Bill 197. You can also donate to the Tularosa Basin Downwinders Consortium, one of the groups leading this campaign, through their website. Additionally, you can help by continuing to support and campaign for the successful implementation of The Treaty on the Prohibition of Nuclear Weapons. Under article 6 of the Nuclear Ban Treaty all nations are required to provide comprehensive victim assistance to those impacted by nuclear weapons production, testing, and use. By contributing to the success of this vital Treaty, we can help make victim assistance and environmental remediation an international norm and a responsibility of all nations. The horror and trauma inflicted by nuclear weapons do not start and end when a bomb is dropped in war – it is evident in the poisoned land, sick people, grieving families, cycles of poverty, and pain of those living seventy-three later with the burden of being the unacknowledged guinea pigs for the worst weapon ever created.