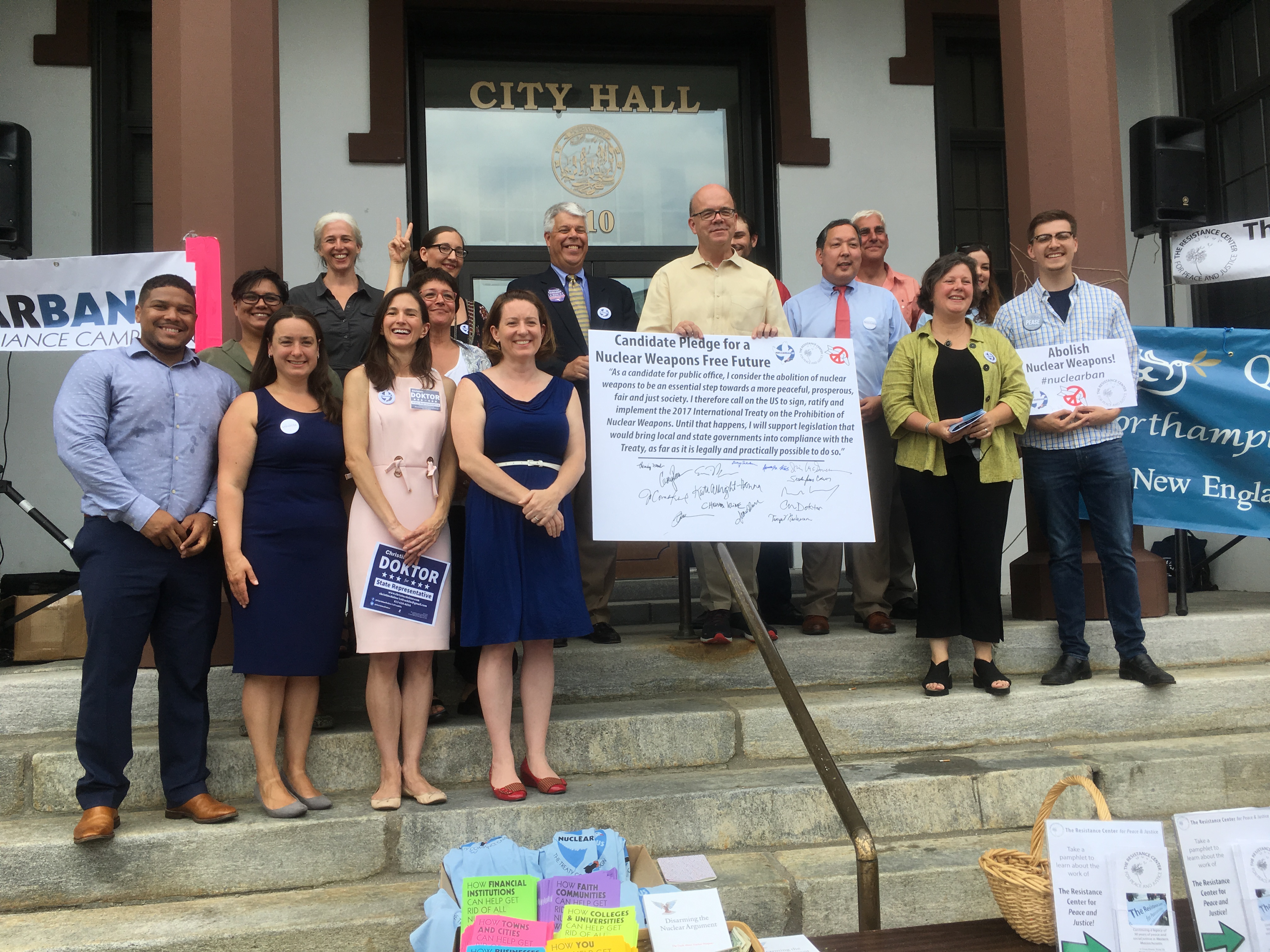 Rep. McGovern joined by 14 Other Candidates in support of Nuclear Ban

NORTHAMPTON, MA. July 14, 2018: U.S. Representative Jim McGovern signed two historic pledges that support the abolition of nuclear weapons. He is the first voting member of Congress to sign the ICAN Parliamentary / Congressional Pledge (Rep. Eleanor Holmes Norton of Washington D.C. who is denied a vote in the House, signed on May 21, 2018.) By signing, Representative McGovern has joined nearly 1,000 parliamentarians from 30 countries who have pledged to support the Nuclear Ban Treaty in their respective countries. The Treaty was adopted by 122 countries exactly one year ago at the UN. So far, 59 countries have signed it.

Regarding his motivation towards supporting the Treaty and the campaign, Rep. McGovern stated: “The ultimate human rights issue is whether we all get incinerated by nuclear weapons.”

ICAN Executive Director Beatrice Fihn sent McGovern an email from the ICAN office in Geneva, Switzerland: “Thank you to Representative Jim McGovern for the courage he is showing to stand up for the abolition of nuclear weapons,” she said. “No efforts to make the world safe from the humanitarian risk that nuclear weapons represent can ever be fully complete without the US playing its role.”

Representative McGovern was joined by 14 other candidates in signing the Candidate Pledge for a Nuclear Weapons Free Future. Two others could not attend but also signed today. These are the first candidates for public office in the country to sign this pledge, which was launched today and is being rolled out in other states over the coming weeks.

Modeled after the ICAN Parliamentary Pledge, the Candidates Pledge states:
“As a candidate for public office, I consider the abolition of nuclear weapons to be an essential step towards a more peaceful, prosperous, fair and just society. I therefore call on the US to sign, ratify and implement the 2017 International Treaty on the Prohibition of Nuclear Weapons. Until that happens, I will support legislation that would bring local and state governments into compliance with the Treaty, as far as it is legally and practically possible to do so.”

The event was hosted by The Resistance Center for Peace and Justice (TRC, http://theresistancecenter.org). The TRC is a founding partner of NuclearBan.US (https://www.nuclearban.us), a locally-based, national campaign to move the United States towards the adoption of the Treaty on the Prohibition of Nuclear Weapons (the Nuclear Ban Treaty). Both TRC and NuclearBan.US are official partners of the International Campaign to Abolish Nuclear Weapons (ICAN, http://www.icanw.org), which won the 2017 Nobel Peace Prize for its work on the Treaty. Northampton Quakers and the Traprock Center were also co-sponsors of the event.