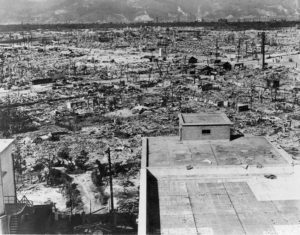 In case you are wondering what a ‘low yield’ nuclear weapon looks like, these are the effects of a single 15 KT bomb landing on the city of Hiroshima in 1945:

President Trump, in his draft Nuclear Posture Review, leaked to the press last week, is calling for the United States to add new ‘low yield’ nuclear weapons to the US arsenal. The US already has more than 7,000 nuclear weapons. By ‘low yield’, the Pentagon apparently means nuclear weapons with a yield of 20 KT or less – in other words, roughly the size of the bombs that were dropped on Hiroshima and Nagasaki, which by today’s standards are very small.

(1) By removing parts of the warhead, some of the US nuclear weapons can already be configured to have lower yields, down to as ‘small’ as 0.3 KT. This is still 30 times more powerful than the ‘Mother of All Bombs’ that was used last year in Afghanistan, the largest non-nuclear bomb in the US arsenal. There is no way for an adversary to know, however, that an incoming missile is one with a ‘reduced’ yield, so the assumption has to be made that if a Trident missile is heading their way, it is carrying the full load of 8 warheads of 455 KT each.