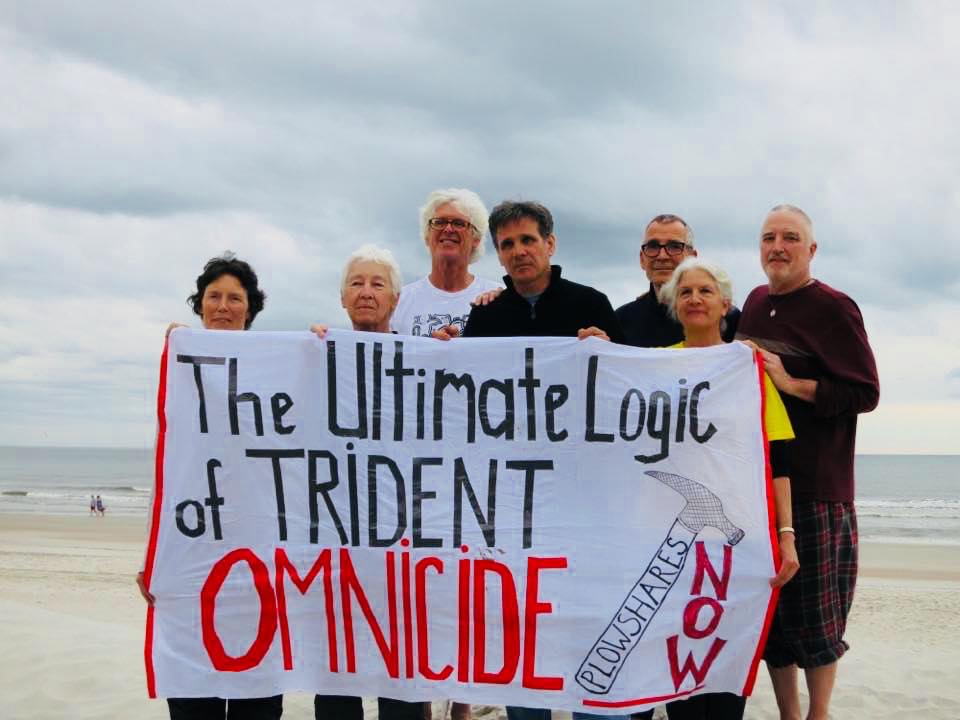 On November 7th, the seven Kings Bay Plowshares activists were back in court. The activists are charged with felony trespassing, conspiracy and destruction of property after breaking into the Kings Bay Naval Base in Georgia to protest the U.S. nuclear weapons triad[1]. In an effort to dismiss or reduce the charges, a motion was filed on behalf of the seven Plowshares activists in September to argue for their protection under the Religious Freedom Restoration Act. They claim that the charges leveled against them constitute an unfair impingement on their religious practice. If convicted, they could each face lengthy prison sentences.

During a nine and a half hour hearing, the court heard testimony from experts who discussed the long Catholic history of resisting nuclear weapons. Theologian Professor Jeannine Hill Fletcher of Fordham University detailed how nuclear weapons are fully contrary to Catholic social teachings and tradition. She likened the activists’ actions to those of the prophets from the Old Testament onward, including Dr. ML King, Jr.  After referring to Pope John the 23rd’s 1963 Pacem in Terris and Gaudium et Spes, which condemned the use of nuclear weapons, she pointed to Pope Francis’ statement in 2017 that “The threat of their use, as well as their very possession, is to be firmly condemned.”  She also spoke about to the “primacy of conscience” in the Catholic faith that dates back to the 13th century teachings of Thomas Aquinas.

Codefendant Jesuit Father Steve Kelly, his jailhouse shackles clanking as he crossed to the witness stand, testified that their action was religious, and constituted preaching the word of God that nuclear weapons are sinful.

Codefendant Clare Grady came next, emphasizing that her action was not a security threat but “nonviolent symbolic disarmament.” She movingly told of her upbringing in a faithful and activist family informed by Catholic social teaching. The two co-defendants made clear that they were motivated because of their deeply held Catholic values.

The last witness to testified was on behalf of the Government prosecution. Captain Brian Lepine, Commander of the Kings Bay Naval Station testified for over two hours, repeatedly refusing to acknowledge the existence of nuclear weapons on the Trident submarines at their homeport. He refused to use the words nuclear weapons, saying “I cannot confirm or deny the existence of our security assets.”  He said the seven activists dangerously interfered with base operations.

As Commander Robert Green (Retired), author of the new 2018 edition of “Security Without Nuclear Deterrence” states, “The Plowshares are upholding the laws, not the government.” Both he and NuclearBan.US Executive Director, Timmon Wallis (author of the 2018 edition of “Disarming the Nuclear Argument”) have submitted their works for the defense.  The continuation of the hearing is scheduled for November 19th. The remaining 5 codefendants and another prosecution are scheduled to testify.

Nuclear weapons eviscerate the rule of law, enforce white supremacy, perpetuate endless war and environmental destruction and ensure impunity for all manner of crimes against humanity. Dr. King said, “The ultimate logic of racism is genocide.” We say, “The ultimate logic of Trident is omnicide.” A just and peaceful world is possible when we join prayers with action. Swords into Plowshares!” ~ Kings Bay Plowshares Statement, April 4, 2018

On April 4, 2018, on the 50thanniversary of Martin Luther King Jr.’s assassination, seven plowshares activists inspired by their Catholic faith entered the Kings Bay Naval Submarine Base in St. Mary’s, Georgia to peacefully protest the U.S. nuclear weapons system. They carried crime scene tape and baby bottles of their own blood meant to symbolize the violence and existential threat posed by nuclear weapons. They also carried an indictmentagainst the US government, President Trump, Kings Bay Base Commander Brian Lepine, and the entire nuclear triad for crimes against peace.

The Kings Bay Naval Base is the second largest nuclear submarine base in the world. It holds six ballistic missile subs and two guided missile subs, each carrying 20 Trident II D5 thermonuclear missiles, with each missile carrying four nuclear warheads. Just one of these Trident nuclear submarines carry enough nuclear weapons to cause the equivalent of 600 Hiroshima bombings. The activists visited three sites on the base to symbolically disarmed the nuclear triad.

The seven activists aimed to call attention to the explicit violence and contradiction of the U.S. “peace through strength” strategy, that risks the annihilation of life on earth for the maintenance of U.S. empire and imperialism. In their powerful statement, they condemned the country’s ongoing nuclear weapons system for the harm it inflicts on human beings and the environment and for its clear violation of both international and moral law. They cited the human and environmental damage inflicted by the mining, production, testing, and dumping of nuclear material, the redirection of funds away from meeting human needs to maintaining weapons of mass death, and the dehumanization that underlies the threat of nuclear genocide as a viable foreign policy. Their most recent action is the latest in over 100 similar Plowshares demonstrations that have taken place around the world since the 1980s.

The next hearing is scheduled for this Monday November 19th, 2018 at the Federal Courthouse in Brunswick, GA. Anyone in the area is invited to attend. You can also show your support for the activists by mentioning them as you go forth in your activism, including them in your vigils or public statements, or organizing a vigil of your own, writing lettersto them in jail, or working in your community to align with the Nuclear Ban Treaty. Other organizations working for the abolition of nuclear weapons are welcome to give support and statements and to join this trial. The trial is not about Catholicism, but the grave threat and immorality of nuclear weapons. It’s about a living Community.

Please check out their websiteto stay updated on their case and find out how you can support them.

[1]The nuclear triad refers to the three-pronged strategy of having land-base, submarine-based, and air-based nuclear capabilities (aka the ability to destroy the world in three ways).