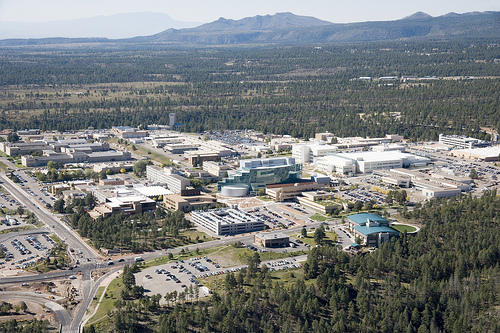 This is part two of the NuclearBan.US blog series profiling the major nuclear weapons companies contracted by governments to build and maintain nuclear weapons. Up next – AECOM.

AECOM is one of those massive multinational corporations that you’ve probably never heard of – yet is touted as the largest design companyin the US. It is an American engineering company that designs, builds, and manages a range of infrastructure projects. Headquartered in Los Angeles, California, AECOM has 87,000 employees and earned $18 billion in revenue in 2017. Last year, AECOM’s CEO Michael Burke made $16.5 million.

AECOM promotes itself as an innovative company that helps provide everything from clean water and energy, to new skyscrapers, transit systems, and parks for children. It has been listed by Fortunemagazine as one of the world’s “Most Admired Companies” and claims its purpose is “to deliver a better world”and to “protect our planet.”

They previously worked in partnership with BWX technologies, Northrop Grumman, and CH2M Hill to manage the Nevada National Security Site (previously known as the Nevada Test Site), which has served as the primary nuclear weapons test site for the United States since 1951. This particular group of companies lost their contract to operate the Nevada Test Site in 2017 to a new group of companies, consisting of Honeywell, Jacobs Engineering, and Hill Nuclear Inc.

However, AECOM still operates Lawrence Livermore Labs and Los Alamos National Laboratory, in partnership with the University of California, Bechtel, and BWX. Under AECOM’s joint management of the Los Alamosand Lawrence LivermoreLabs they have been cited many times for security breaches, costly accidents and injuries to employees. These sites were even forced to temporarily shut down because of their inability to control workplace safety.

A series of reports from the Center for Public Integritypaints a bleak picture of corporate management of nuclear weapon facilities. They document how companies like AECOM have routinely cut regulatory and safety corners while amassing record profits from lucrative defense contracts. AECOM, along with the other nuclear weapons contractors, has been cited and fined millions of dollars by the Department of Energy for their safety and security negligence, but these fines are small enough that they barely cut into corporate profits.

In this lax regulatory environment, it is the workers who suffer. Working for nuclear weapons labs and facilities is an exceptionally dangerous job. Every year reportssurface highlighting worker exposure to radiation, frequent accidents, and security breaches.

In a reckless and dangerous moveby the Trump administration, the government has just cut the budget of the Defense Nuclear Facility Safety Board – the board tasked with monitoring the safety of US nuclear facilities. Under the new cuts, the board loses its authority to monitor workplace safety and will no longer have access to three-quarters of the US nuclear weapons facilities – all this as the Trump administration ratchets up production on its nuclear modernization plan.

AECOM, along with other companies in the nuclear weapons industry, is getting rich producing weapons of mass death while, among other things, sacrificing workplace safety. We encourage everyone to check their investments and make sure that their personal finances are not supporting AECOM. Talk to your church, your university, your bank, and your city to let them know that any public institution intent on supporting the public good and complying with international law should not be supporting nuclear weapons profiteers like AECOM.