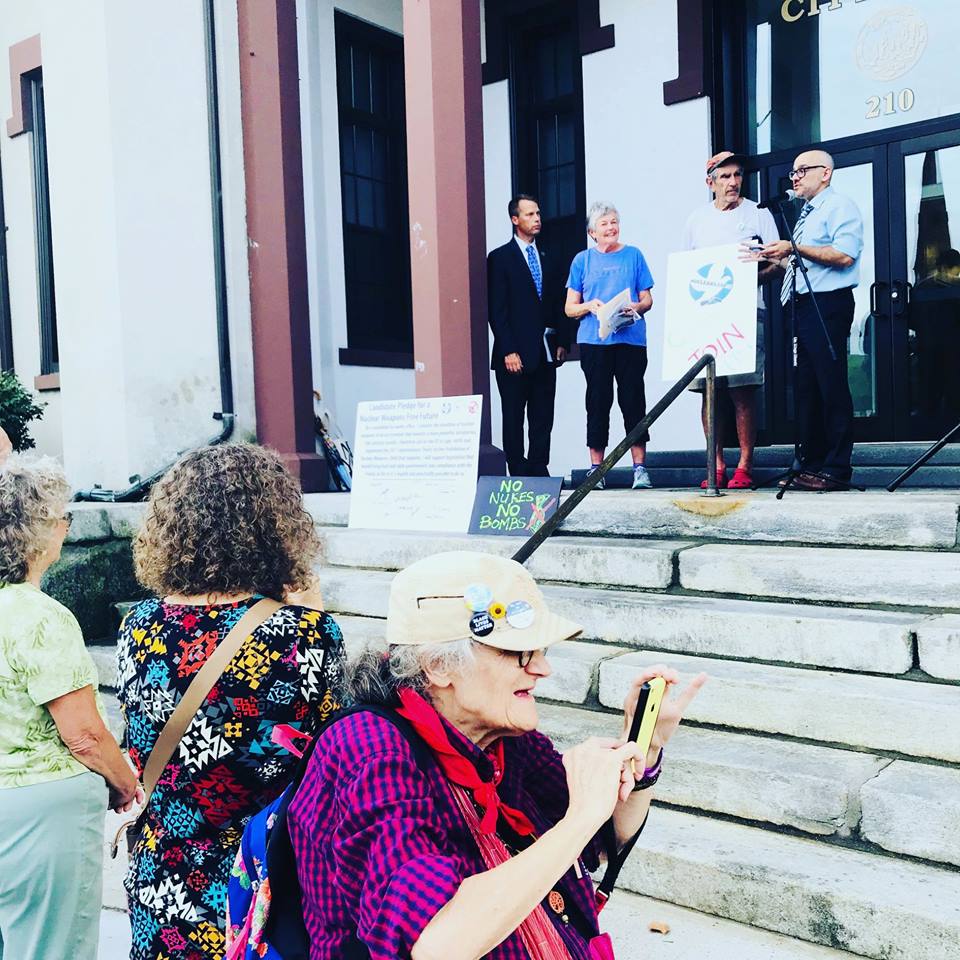 (NORTHAMPTON, MA) Last Wednesday September 26, at a ceremony on the steps of Northampton city hall, Northampton Mayor David Narkewicz issued an executive policy order establishing a city policy barring, to the extent practical and permitted by law, Northampton from investing and contracting with nuclear weapons companies. Under the executive policy order Mayor Narkewicz established a city-wide commitment to “reduce and eventually eliminate any and all ties to the nuclear weapons industry”. The policy order also establishes September 26 as Nuclear Ban Day in Northampton, which the UN designated in 2013 as the International Day for the Total Elimination of Nuclear Weapons.

The executive policy order is the culmination of a citizen-led campaign by volunteers of The Resistance Center for Peace and Justice and NuclearBan.US to bring the city into alignment with the 2017 Treaty on the Prohibition of Nuclear Weapons. Mayor Narkewicz’s strong show of support for nuclear weapons elimination and the Nuclear Ban Treaty should serve as a model for other city mayors and elected officials looking to deepen their commitment to achieving a nuclear-free world.

Northampton has been a municipal leader in the nuclear weapons abolition movement since the 1980s when it became one of the first cities to push for a Nuclear Freeze. In 2005 Northampton joined Mayors for Peace, an international network of cities dedicated to the promotion of peace and nuclear weapons abolition. Last year the Northampton City Council passed a city resolution calling on the US government to embrace the Nuclear Ban Treaty and pull back from the brink of nuclear war. Once the city has eliminated their ties to the nuclear weapons industry they will become the third city to officially align with the Nuclear Ban Treaty. Takoma Park, Maryland and Berkeley, California became the first Treaty Aligned cities earlier this year.

We encourage other city mayors, particularly the 215 US member cities in Mayors for Peace to show their commitment to nuclear weapons abolition by instituting similar policy change in their municipalities that would eliminate or limit their connection to the nuclear weapons industry.