US Pretends to Want "a World Without Nuclear Weapons” 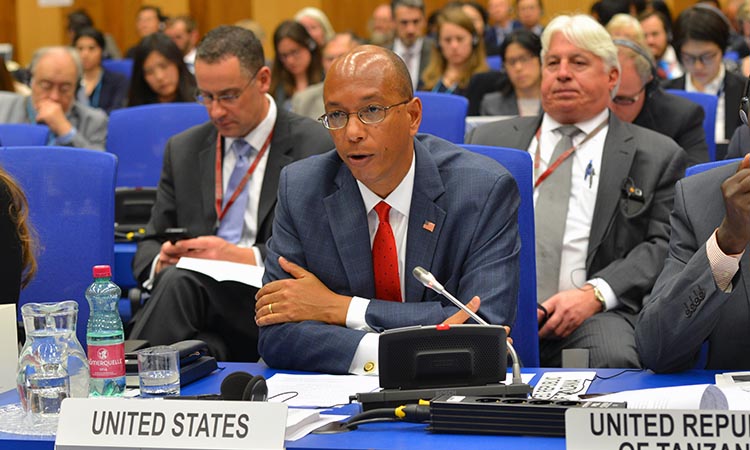 US Ambassador Robert Wood at the NPT meeting in Geneva last week. PHOTO: US MISSION

More than 100 countries have been meeting in Geneva over the past two weeks to prepare for the next Review Conference of the Non-Proliferation Treaty (NPT). This annual ritual is one of the rare occasions when the nuclear-armed nations sit down with the rest of the world to discuss progress towards achieving the goals of the NPT.

As has been the case for many decades, the United States used this occasion to pretend it is committed to nuclear disarmament. Despite the recent threats to use nuclear weapons against North Korea and plans for more than $1.7 Trillion worth of upgrades to every aspect of the US nuclear arsenal over the next 30 years, the official US position when talking to other countries is that it wants nuclear disarmament.

“The United States remains committed to the long-term goal of achieving a world without nuclear weapons, and we look forward to working with all states to create the conditions that could facilitate further nuclear disarmament,” said US Ambassador Robert Wood to the assembled diplomats in Geneva. He did not mean by this that the United States will sign the Treaty on the Prohibition of Nuclear Weapons any time soon. But the United States desperately needs to be seen to be actively pursuing a ‘verifiable agreement’ among nuclear-armed states to eliminate their nuclear arsenals. Why?

In 1995, when there was a possibility that the NPT could be terminated, the United States, together with the UK, France, Russia and China gave an “unequivocal undertaking” to fulfil their obligations under Article VI of the NPT and negotiate the complete elimination of their nuclear weapons. This was more than 20 years ago. The original promise, made in 1968, was to negotiate “in good faith” and “at an early date”. That was 50 years ago.

The truth is that the United States is not working towards the elimination of all nuclear weapons. On the contrary, this administration appears more committed to these weapons than ever before – and is willing to actually use them if they think the conditions are right. The rest of the world has had enough of the promises. They now want to see results!

The United States government will need more than fine words of ‘commitment’ to nuclear disarmament. They will need to start taking real steps to eliminate these weapons if they expect the world’s non-proliferation regime to remain in place. And a world in which every country has nuclear weapons aimed at every other country is a prospect too dangerous for anyone to contemplate.