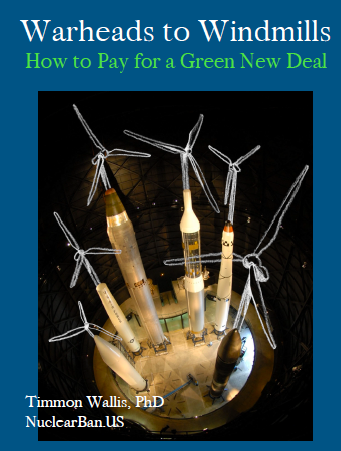 Nuclear weapons cost billions of dollars, just to be maintained. The US plans to spend billions more upgrading and ‘modernizing’ them. Over the next 30 years, the total cost of US nuclear weapons will be more than $3 trillion. Unless we decide to use that money instead to address climate change. A Green New Deal will need about $3 trillion of government investment (in addition to $6 trillion from private investors) over the next 30 years.

A Green New Deal will also need scientific and engineering expertise, research facilities and technological infrastructure to solve – urgently – the remaining challenges and cut the costs of renewable energy. These are currently swallowed up by the nuclear weapons industry. We must shift the money, manpower and other resources from nuclear weapons to meet the needs of a Green New Deal – and solve two existential threats to our survival on this planet with a single stroke.

Warheads to Windmills looks at these two existential threats, what it would cost to fix one of them and what would be released by fixing the other. The report is available now. To order a hard copy of the report, send your address (within the US) to: reports@nuclearban.us

“Unless we take swift and decisive action to reduce global carbon emissions, the consequences of climate change will be catastrophic. This is a life-threatening emergency that can only be adequately addressed in the timeframe we have available to us through a Green New Deal.

The existence of nuclear weapons is also a life-threatening emergency that threatens all life on this planet, and needs to be addressed with equal urgency. The world has now outlawed these weapons through the Nuclear Ban Treaty and it is up to the US to now lead the way to their total elimination.

To pay for, and implement, a Green New Deal is going to require money, skills, jobs, technological innovation and infrastructure on an unprecedented scale. To eliminate nuclear weapons requires nothing more than the political will to do so. But eliminating nuclear weapons would then release a huge amount of money, skills, jobs, technological innovation and infrastructure needed for a Green New Deal. We can solve both these global emergencies at a single stroke.” from the introduction to Warheads to Windmills, by Timmon Wallis, NuclearBan.US

“Pressuring the Profiteers” Zoom event on June 26, 11 AM – 1 PM EDT
June 22, 2021
Representative Rashida Tlaib talks about the need to eliminate nuclear weapons.
May 19, 2021
Recent Articles
FROM OUR GALLERY