What Happens on the Korean Peninsula When the Olympics End? 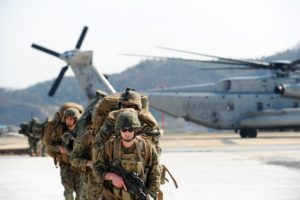 US Marines on exercise in South Korea, 2014

This coming Sunday, February 25th, at 8pm South Korean time, athletes and fans from across the globe will gather at the Pyeongchang Stadium for the final closing ceremony of the 2018 Winter Olympics. The theme for this closing ceremony is ‘the human spirit of perseverance’. Songs will be sung and tears will be shed as the great moments of this year’s Olympic Games are remembered and the Olympic torch is passed on to the mayor of Beijing for the next round of Olympic Games in 2020.

This year’s Olympics may well be remembered for the overtures of peace which took place between North and South Korea, for the Olympic Truce which was announced by UN Secretary-General Antonio Guterres, or indeed for the postponement of US-South Korea military exercises which were due to begin just as the Olympic Games were getting underway. But once the dust begins to settle in Pyeongchang Stadium on Monday morning, and the Olympic Truce is over, those exercises are going to get underway, and a very dangerous moment in human history is about to begin.

For it is indeed possible that the timing of the Winter Olympics is the only thing that has prevented nuclear war from already breaking out on the Korean Peninsula this year. Even Donald Trump is not so stupid as to start a war in North Korea while America’s most treasured athletes, not to mention his Vice President, have been located just 40 miles from the North Korean border. But once they have gone, and all the athletes from around the world have gone, and the world’s press have gone, what lies in store for this part of the world?

We already know that three US aircraft carriers are in the vicinity, with dozens of back-up ships, up to 12 squadrons of fighter jets and an unknown number of cruise missiles and other long-range weaponry. Two Trident ballistic missile submarines are also likely to still be in the waters off the coast of North Korea, carrying up to 384 nuclear warheads on board, each one of them many times more powerful than the bombs which destroyed the entire cities of Hiroshima and Nagasaki. We also know that 3 B-2 Stealth bombers arrived at Andersen Airforce Base on Guam just a few weeks ago. These can carry up to 16 nuclear weapons at a time, including the B-83, the largest nuclear weapon currently in the US arsenal, which has the destructive power of approximately 100 Hiroshima-sized bombs.

Tens of thousands of US and South Korean troops will be involved in the military exercises that take place all over South Korea once the Olympics end. Officially, these exercises “are purely defensive in nature and have no connection to ongoing or current events.” However, they include practicing military responses to a simulated North Korean invasion of South Korea, as well as simulating military attacks on North Korea in an imaginary war scenario with the North. In December, Facebook images emerged of a supposed US military exercise involving the capture and destruction of North Korean nuclear facilities.

Whether these exercises are ‘purely defensive’ or not, the reality is that they are perceived in North Korea to be highly threatening. A similar exercise in 1983, involving NATO troops simulating a nuclear war with the Soviet Union in Central Europe, was perceived by Moscow to be a possible cover for an actual invasion and nearly led to World War III. There is no way of knowing what might happen if North Korea felt similarly threatened during an exercise like this.

Only a few weeks ago, the Atomic Scientists told the world that they thought the possibility of nuclear war was greater than at any time since the early 1950s. One reason for this was the bellicose rhetoric being tweeted across the globe and shouted in the halls of the UN between the US and North Korea. We are now entering what is certainly the most dangerous period of human history since the 1980s, if not since the Cuban Missile Crisis. A nuclear war between the US and North Korea could kill more people in a matter of moments than were killed during the whole of World War II. Radioactive fall-out would not be confined to that part of the world but could easily spread to all parts of the United States, not to mention affecting large parts of Russia and China.

We cannot afford to let this happen under any circumstance! Now is the time to write to your members of Congress, to your local newspaper, and to your friends and family. Call for immediate steps to pull us back from the brink of nuclear war, and demand a long-term solution to this problem – which will not go away until we eliminate all nuclear weapons from the face of the earth!

Join our campaign to implement the 2017 Treaty on the Prohibition of Nuclear Weapons and help us get rid of all nuclear weapons before they eliminate us.