Why we all need the INF Treaty 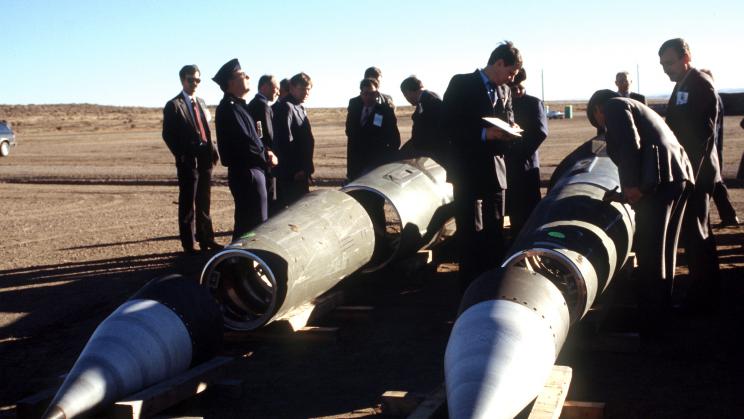 Soviet inspectors and their American escorts stand among several dismantled Pershing II missiles as they view the destruction of other missile components. The missiles are being destroyed in accordance with the Intermediate-Range Nuclear Forces (INF) Treaty. 14 January 1989. Photo: Wikimedia Commons / US Department of Defense / MSGT Jose Lopez Jr.

I spent most of the 1980s campaigning against an American nuclear missile base in England. I watched this base being built from the ground up. I watched them finally bring in the nuclear missiles and lock them up in underground bunkers covered with several feet of concrete and sealed behind huge steel doors.

And I also watched them take those nuclear missiles away again to be dismantled and destroyed. After all the years of campaigning against the building of that base, it was an amazing sight to see the missiles actually leaving. But the most astonishing thing I saw at this missile base was what happened next.

I watched them build a little brick hut, right inside the main gate of the base.  I watched a convoy of military vehicles go onto the base.   As a group of soldiers got out of their vehicles and went into the little hut, I could see that they had Soviet flags on their uniforms.  They came out of the hut and shook hands with the base commander and the American soldiers stationed at the main gate.  The American soldiers saluted the Soviet soldiers just as they would their own commanders. And then they all saluted as the Soviet flag went up a flagpole, while a tinny recording of the Soviet national anthem blared out of a loudspeaker somewhere. This was all going on inside a US nuclear missile base in England.

For the next several years, long after I moved out of that area, those Russian soldiers went freely in and out of this US nuclear missile base. They were allowed to visit any building or bunker on the base and to inspect what was in there. They were allowed to ask any questions they wanted and they could expect honest answers from their US counterparts.

The exact same thing was happening in reverse all across Russia and Eastern Europe. American soldiers were driving straight onto Soviet nuclear missile bases, inspecting their underground bunkers, asking questions, and monitoring what went in and out of those bases. The American flag was flying, alongside the Soviet flag, inside those top secret Soviet military installations.

This was still the 1980s. It was at the height of Cold War tensions, which we know now almost led to nuclear war several times – not just in the 1950s and 60s, but even in the 1980s. Twice, just in 1983, there were computer malfunctions and a series of miscommunications and breakdowns in the chain of command which almost resulted in the launch of nuclear weapons on both sides – and the obliteration of human civilization as we know it.

It was still the Cold War when the INF Treaty was signed, but the INF Treaty was the beginning of the end of that war. It is impossible to overstate the significance of that treaty. It was the first time since the start of the Cold War that the two sides agreed to eliminate an entire class of their most sophisticated weapons. There were other arms control treaties before the INF, but none of these had actually eliminated a single weapon. More than 2,500 nuclear weapons were dismantled and destroyed as a result of the INF Treaty.

But more importantly, it was probably the first time in historythat two heavily armed nations, at a time of heightened tensions that could easily have resulted in ‘hot’ war between them, agreed to establish such an astonishingly intimate arrangement for verifying each other’s compliance with a treaty.

To invite your supposed ‘enemy’ right into the heart of where you keep your most advanced weaponry; to allow them to raise their own flag inside your most secret locations; to be building personal relationships between soldiers and commanders who have been trained to see the other as ‘agents of an evil empire’ and less than human – this was more than remarkable. This was the ending of the most dangerous war in human history. The Cold War was not a war in the traditional sense, but if it had ever turned into ‘hot’ war, that would have been the end of all of us.

And yet, here we are today, with a President who wants to scrap this ground-breaking treaty and reintroduce the very weapons which that treaty eliminated 30 years ago. At the same time, we have politicians and a media who think it is okay to demonize Russia, call them our ‘enemy’ and prepare the public for another ‘Cold War,’ as if the existential struggle between capitalism and communism, as competing ideologies for world domination that was the real Cold War, is somehow replicated by what is going on today.

The fact that our two countries are dominated by megalomaniacs who have competing interests and priorities does not make us ‘enemies’ and does not justify war, cold or hot. It certainly does not justify threatening all life on earth with nuclear annihilation.

The Cold War ended nearly 30 years ago. The INF Treaty played a hugely important role in that. It got rid of a whole class of nuclear weapons, but it left us with too many of these weapons remaining. More than 14,000 nuclear weapons are still in existence today, many thousands of these on hair-trigger alert, ready to be launched at a moment’s notice.

The Treaty on the Prohibition of Nuclear Weapons was agreed by 122 countries at the UN in 2017. So far, 21 of these countries have gone through the ratification process. Once 50 countries have done so, hopefully before the end of this year, the treaty will enter into force and its provisions become international law. The US government is vehemently opposed to this treaty, because it wants to hold onto its nuclear weapons indefinitely.

But just as the INF Treaty paved the way for a new way of thinking, at a time when the whole world thought the Cold War would go on forever, so this new Treaty is paving the way for a world which has finally eliminated this threat and is ready to talk peace. We have lived with the threat of nuclear annihilation hanging over each and every one of us for 73 years. We now have the opportunity to change this, and we should all seize that opportunity!

Dr Timmon Wallis has a PhD in Peace Studies from Bradford University in England. He did his doctoral research on the INF Treaty and how it came about. More recently, he was involved in the process leading up to the adoption by 122 countries of the Treaty on the Prohibition of Nuclear Weapons, for which the International Campaign to Abolish Nuclear Weapons (ICAN) won the 2017 Nobel Peace Prize. He is now Executive Director of NuclearBan.US, which is using this new Treaty to build US support for the total elimination of nuclear weapons.