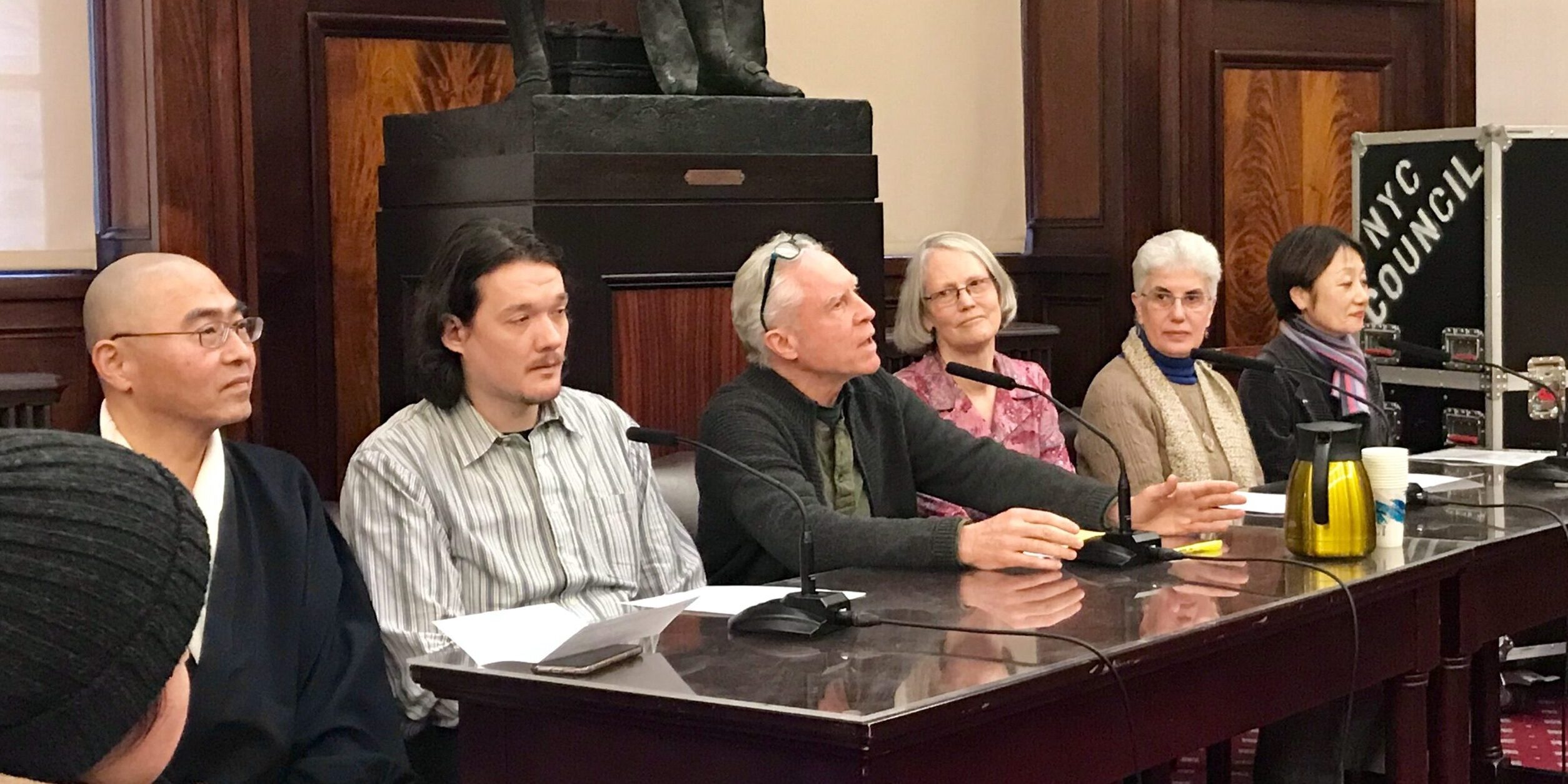 January 29, 2020: New York City moved one step closer to divesting from nuclear weapons this week, after a joint committee hearing in City Hall. As the hearing began, the only opposition was from the Mayor’s Office on a technicality, and the committee was still one vote short of a veto-proof majority. But it looks like the tireless efforts of a small group of campaigners from New York City, calling themselves NYCAN, are about to finally bear fruit, after nearly two years of intense lobbying of the City Council.

After hearing testimonies from about 60 people, the Mayor’s Office moved quickly to announce they would “find a way” to resolve the technicality, and Council Member Fernando Cabrera announced his support for divestment. With Cabrera’s support, these two resolutions now have a veto-proof majority of support on the New York City Council, and with withdrawal of opposition from the Mayor’s office they are almost certain to go through sometime in the coming weeks.

The first of the two bills, introduced by Council Member Daniel Dromm, is INT 1621, which calls for the establishment of an Advisory Committee to investigate and report on New York City’s status as a “nuclear weapons-free zone,” a status New York City has had since 1983. The second, RES 976, calls on the City Comptroller to divest the pension funds of public employees in New York City “to avoid any financial exposure to companies involved in the production and maintenance of nuclear weapons.” It also calls on the federal government to support and join the 2017 Treaty on the Prohibition of Nuclear Weapons.

Council Member Dromm said he was “energized” by the testimony coming from wide range of organizations and from people ranging in age from 19 to 90, from descendants of the original Lenape Nation inhabitants of Manhattan to Nobel Peace Prize-winning members of the International Campaign to Abolish Nuclear Weapons.

Other speakers ranged from proud New Yorkers to survivors of Hiroshima and Nagasaki, from a soldier involved in numerous nuclear bomb tests in Nevada to a relative of Mikhail Gorbachev, from elderly activists who repeatedly spend years in jail for protesting nuclear weapons to bankers and investment experts explaining why divestment from nuclear weapons is actually beneficial to their portfolios.

Manhattan, epicenter of the invention of nuclear weapons, is still suffering from radioactive contamination from those days. A Teamster recalled working in a warehouse where the High Line is now, where barrels were radiating heat and melting the asphalt on the floor. There were multiple mentions of the Doomsday Clock, started in 1947 by guilt-wracked Manhattan Project scientists, which is now “set” closer to “midnight” that at any time in history.

Manhattan has been home to human life for 3,000 years. But expert testimony made clear that one nuclear weapon could erase all the people, animals, art and architecture, and that the radioactivity would last for way more than 3,000 years into the future. New York City, of course, is a prime target for nuclear attack.

Written testimony was also submitted by people from all over the world, including from the Office of the Dalai Lama, and from US Rep. Eleanor Holmes Norton of D.C., whose bill H.R. 2419 would de-fund US nuclear weapons and shift the taxpayer dollars to green technologies, jobs, and alleviation of poverty.

Although New York City pensions have less than $500 million invested in the nuclear weapons industry, one-tenth its level of investments in fossil fuels, divestment by New York would be hugely significant to the global movement to abolish nuclear weapons and put financial pressure on the companies responsible.

New York City oversees five pension funds, which between them represent the fourth largest public pension program in the country, with over $200 billion worth of investments. In 2018, the City Comptroller announced that the city had begun a five-year process of divesting the pension funds of more than $5 billion from the fossil fuel industry. Nuclear weapons divestment is a more recent phenomenon, boosted by the adoption in 2017 of the UN Treaty on the Prohibition of Nuclear Weapons.

So far, two of the largest pension funds in the world, the Norwegian Sovereign Fund and ABP of the Netherlands, have committed to divesting from the nuclear weapons industry. Other financial institutions in Europe and Japan, including Deutchebank and Resona Holdings have joined more than 36 others who have decided to divest from nuclear weapons. In the US, cities like Berkeley, CA, Takoma Park, MD and Northampton, MA, have divested, along with Amalgamated Bank of New York and Green Century Fund in Boston.